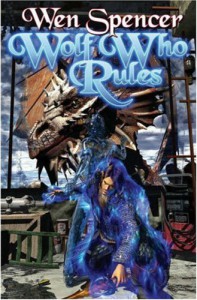 Spoiler Alert! Since this review is for Book 2 of the Tinker Series, it carries spoilers for Book 1.

And so the story of Elfhome continues, with Beloved Tinker of Wind and her husband Wolf Who Rules Wind. At the end of the previous book, Tinker had managed to win free of the oni, create a land-based gate that destroyed the gate in orbit... permanently stranding Pittsburgh on Elfhome, and had killed the oni leader Lord Tomtom. Wolf Who Rules, Tinker Book 2, continues the story of the once-human and now elf Tinker ze domi as she tries to clean up the mess left behind.

Complete with references to Alice in Wonderland as well as the Wizard of Oz, Tinker's nightmares are keeping her from sleeping... she hasn't had a good night's rest since the gate came down. Unfortunately, that is leading her to react slowly and instinctively to the world around her, which isn't the best thing when the political structure of the city is collapsing around her and the elves are determined to rid their world of any remaining oni. Once Tinker starts to make sense of her dreams, she realizes that must continue to follow the yellow brick road to save the lives of even more people.

This is a great sequel to Tinker... since the main character introductions and motives are explained in the first book, this second book is free to introduce new characters and bring in the politics of the Court as well as continue on previous storylines including Tinker's feelings toward her sekasha Pony. We also see Riki again and learn more about the Tengu, their history, and how they fit into Elfhome's future. Tinker brings a path of destruction as usual, but she also brings love and hope into the lives of others. But will she be able to close the Ghostlands and save the lives of all of those affected by the gate's collapse?

If Wolf Who Rules is a book that interests you, the kindle version is currently available at http://www.amazon.com/dp/B00AP91UDC/?tag=shasworofboo-20.

If you enjoyed my review, I would appreciate if you could mark it as being helpful on Amazon as well, as this is useful to both the reviewer and the author. I have included the link to the Amazon review in the Source section at the bottom of this review.